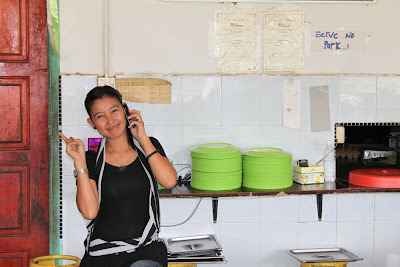 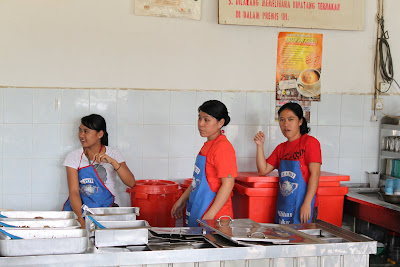 On the way to Sandakan in eastern Sabah, I stopped for a meal at this remote restaurant. I approached GIB but she was preoccupied with her cell phone.

Me: What do you have today? (I spoke in Bahasa Malaysia or Malay, the national language of Malaysia)

She gave me a thumbs up, and continued chatting on her phone.

Her colleagues: She's talking with her boyfriend.

They giggled and laughed.

Her colleagues: Yes, every day she's on the phone.

GIB: Marry them.
Me: Ha, ha, they're too young for me.
More giggles and more laughter from her friends.
GIB: No problem.

(In South-east Asia, it's not considered rude to ask a person personal questions as long as your concern is sincere.)