How to get into Laos from Thailand

Apart from flying straight to the capital of Laos, Vientiane, another way is to enter the country from Nong Khai (border town) or Udon Thani (airport) in north-east Thailand.

1. From Nong Khai. Travel to Nong Khai by train or bus. Take the international bus shown in the pic from the bus station in the city. Bus takes you across the Friendship Bridge over the Mekong into Laos. The bus trip ends at the Talart (market)

2.  From Udon Thani. Taxis make the run to the Friendship Bridge. Board the international bus on the Thai side of the Bridge.

FYI:  Asean residents do not require visas to visit Laos.


Vientiane's bus station at Talart (Thai for market). Get your supply of snacks here before your marathon bus journey.

Lao kids waving goodbye to you.

Hope you've enjoyed your "journey" through Laos with me. Now, this is what Lonely Planet, the guru of travel guides, has to say about Laos:

After years of war and isolation, Southeast Asia’s most pristine environment, intact cultures and quite possibly the most chilled-out people on earth mean destination Laos is fast earning cult status among travellers. It is developing quickly but still has much of the tradition that has sadly disappeared elsewhere in the region. Village life is refreshingly simple and even in Vientiane it’s hard to believe this sort of languid riverfront life exists in a national capital. Then, of course, there is the historic royal city of Luang Prabang, where watching as hundreds of saffron-robed monks move silently among centuries-old monasteries is as romantic a scene as you’ll experience anywhere in Asia.


(Courtesy of Lonely Planet)
Posted by Roger at 3:18 PM 6 comments:

In the preceding post I described my visit to a secondary school in Luang Prabang. Riding on my rented bicycle to a weaving village outside town, I came across this village school.

Although school was closed for the day, some students were still playing on its premises.

The future of Laos having a good time.

A funny thing happened here. Travelling back to Vientiane from Luang Prabang, we stopped by the roadside to ease our bursting bladders in the bushes. In our haste, we failed to notice a group of primary school kids observing us in silence from a discreet distance. Embarrassed and shocked to see them, I hollered "Sawatdee kap" (a Thai greeting) whereupon they jumped up and down in delight and shouted in unison "Sawatdee kap".

School: If there's any country where education is the key to uplifting the standard of living, it's Laos. I dropped by at this secondary school in Luang Prabang. Like most schools in the region, I could just cycle in and say hello to the students and staff.

Peering into a classroom, I noticed that it was quite large. Although there was no teacher in the classroom, the students numbering about 50 were well-behaved.

Since they learn English, the students spoke the language though not so fluently. 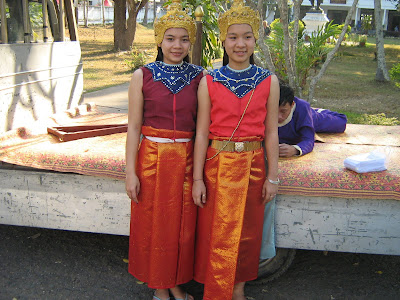 Last night host Laos basked in the limelight as it staged a 3-hour opening ceremony. If you had seen the ceremony on TV, you'd have seen girls in their resplendent and colourful costumes as those worn by the two girls shown in the  photo.

I met these two girls at the Royal Museum in Luang Prabang. Laotians are humble and simple folks, and pose for photos with a smile. If you can speak Thai, they'll give you an even wider smile (possibly because of your weird Thai!)
Posted by Roger at 2:45 PM 2 comments:

Street food:  Eating on the cheap in Luang Prabang

Food can make or break your trip. Food poisoning can be a nightmare. A fellow backpacker from Australia fell prey to it in Sabah, and was confined to bed for three days. Since I am quite cautious, I've been spared except for a mild case of food  poisoning in India. It seems everyone who goes to India inevitably suffers from food poisoning regardless of the precautions you take. Food that is fried properly on the spot is

generally safe from my experience. Food left in the open, cut fruits, raw veggies, ice cubes, cold drinks unless from a bottle, and milk products I avoid

I find Laotian food...not to my taste, put it this way. But one's man meat is another man's poison. What do you think of the food below?

My advice is when in doubt don't be greedy and eat. Unless, it's your last day on earth!

Best Way to End the Day in Luang Prabang, Laos

Boats on the Mekong:  Berthed for the night after unloading their cargoes of oranges, these boats will return to Thailand the next day.

After a hot and sweaty day exploring Luang Praband and its outskirts, the perfect way to end the day was a meal by the Mekong. And, of course, unfailingly with a Beer Lao. LOL. Give me the Mekong any time, and life would be perfect.

The best thing about having your own transport, even if it's the humble bicycle, is the luxury of stopping any time I like when something strikes my fancy like this group of Laotians playing this game using metal balls. The name of the game is on the tip of my tongue but still I can't recall it. Need your help here.

I saw oranges being carried up the steep flight of steps from the Mekong River.

These oranges are from northern Thailand. I too squatted like the locals in choosing the oranges to buy.

I was surprised to see this Chinese banner at a restaurant. Naturally I rode in, and had a chat with the people inside. Being close to Yunnan in China, Chinese influence is quite marked. Cycling outside the city of Luang Prabang, I chanced on a bazaar with a lot of Chinese traders.

One of the memorable and pleasurable experiences about independent travel is the chance to see really surprisng things denied to those on packaged tours.
For instance, while cycling to a weaving village outside Luang Prabang I was astounded at the sight of hundreds of young boys and girls carrying wooden rifles. They arrived on foot,bicycles, scooters and motor-bikes. I think it was some kind of training they had to undergo. Anyway, they appeared excited. 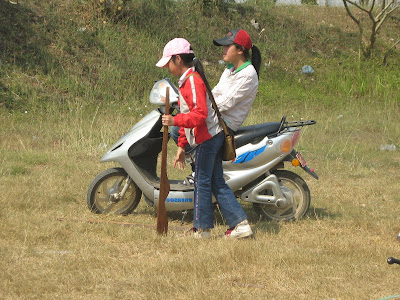 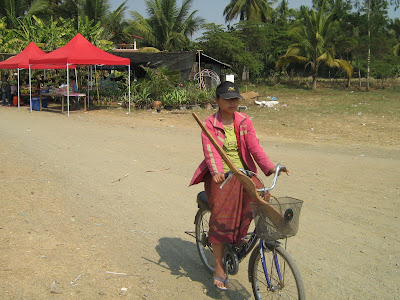 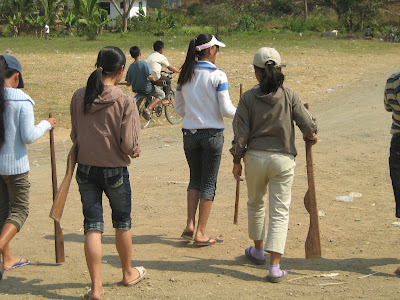 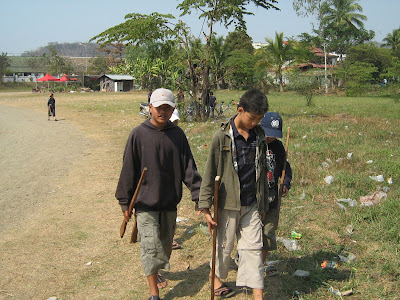 The Mekong in Luang Prabang 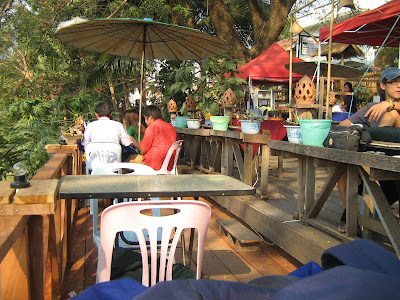 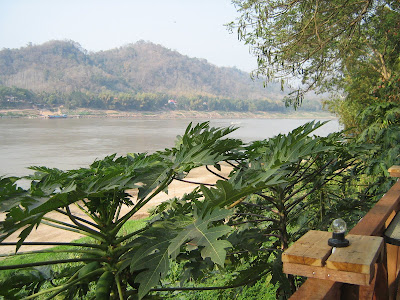 The Mekong River is a magical  attraction for most people so it's not surprising that dining by the river is a popular pastime in Luang Prabang for both the locals and tourists. I don't think anyone can resist the lure of the Mekong especially when a cold Beer Lao is dangled in front of you! And don't forget the beer is reputedly the best in the region. 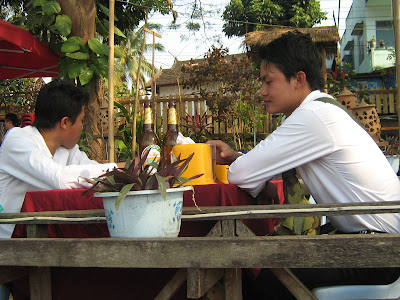 And neither can the local students who make for a beeline for the restaurants overlooking the Mekong.