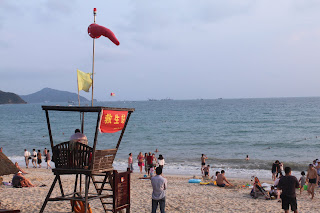 If you are a fan of beauty pageants you would have known that four World Beauty Pageants were held in Sanya. With soft golden sand, the beach can be described as beautiful. Definitely better than the much-hyped Kuta beach in Bali where the beach is black and firm enough for motor-bikes. 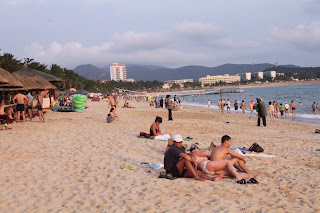 If you are observant enough, you will see Caucasians in the photo. I was surprised to see so many of them in Sanya, and I later realised that they were Russians. Huge signs in the Russian script were everywhere enticing them to hotels, restaurants and entertainment spots. 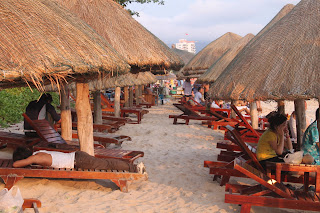 Like in Phuket, rent a beach hut and spend the day gazing out to sea. And, of course, all that contortions on the wooden deck chair will soon give you all sorts of aches, real and imaginary. Naturally, someone then comes along and offer you a Chinese massage. 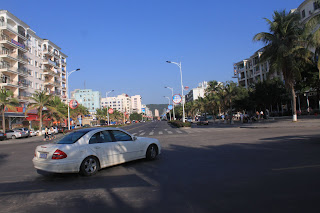 Notice the coconut trees? Hainan is full of coconut trees, giving it a tropical atmosphere. As Sanya is in the south of Hainan, it's hot while Haikou in the north is pleasantly cool. I noticed that coconut juice is a favourite with the locals. 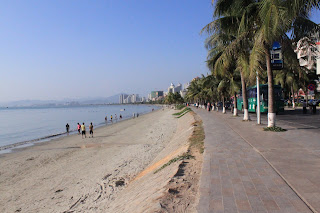 Sanya beach is not nice compared to Dadonghai, a nicer beach about 10 -minute cab ride away. Sanya is crammed with hotels. 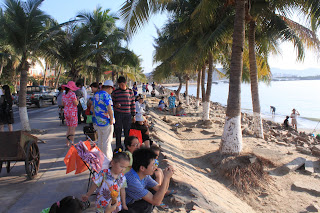 While northern China  freezes over this year, Sanya is hot. I wasn't surprised that Hainan in January is very popular with the mainland Chinese. 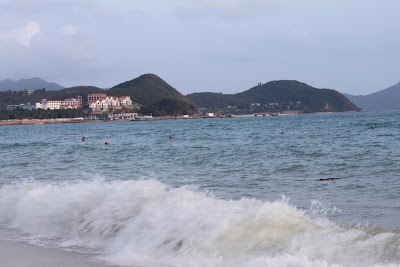 From Shenzhen I decided to travel to Hainan Island but was undecided whether to fly or to take the train and bus.

By train I'd have to go to Guangzhou and from there continue by bus or train. In the end I decided that the hassles were not worth it so I decided to fly.

After all flying was cheap (about SGD $80) and it took only an hour compared to the whole day by train or bus.

Thirty years ago I took my first domestic flight in China, and it was an experience filled with anxiety because in those days China's aircraft were mostly Russian with a poor safety record. But now they use modern jets like the A320.

The funny thing I noticed were the seats.  They were so thin unlike the luxurious ones I've been used to. Inflight refreshements were a small packet of dried fruit and a small bottle of drinking water. As far as the refreshments were concerned, clearly not much has changed in 30 years.

As for inflight entertainment, I noticed some of the Chinese amusing themselves with movies and games on their notebooks.

Me? Well, I amused myself playing hockey, bowling and flying a warplane.

In an hour, Shenzhen Airways landed in Haikou, the capital of Hainan.

I had finally arrived in the land of my ancestors, and the favourite spot for banishing officials who fell into disfavour with the Emperor.
Posted by Roger at 5:40 PM No comments: 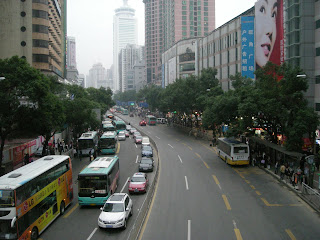 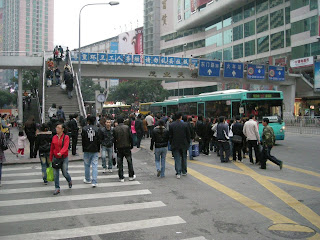 Downtown Shenzhen. Reminds you of which city? I found the cool weather in January just right. It drizzled on certain days with the skies grey most of the time.

Public buses are air-conditioned and cheap. One yuan can take you on a half hour's trip. But you have to fight with the huge crowd. Taxis are cheap and plentiful. I took taxis in Shenzhen but buses (less crowded) in Hainan Island.

If it is your first trip to China, you'll soon realise that people are like ants - they are everywhere! 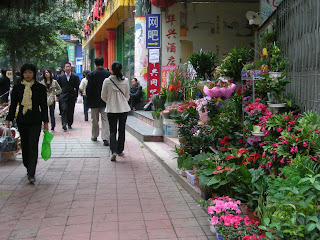 Fortunately, the sidewalks in China are very wide, some as wide as a four-lane road. 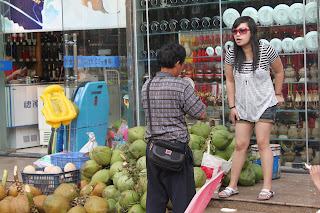 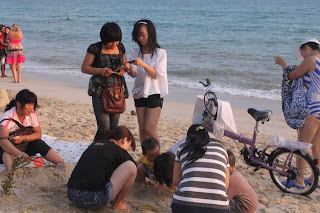 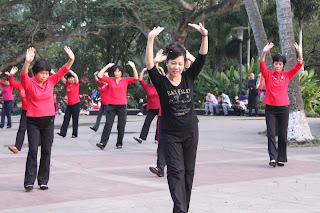 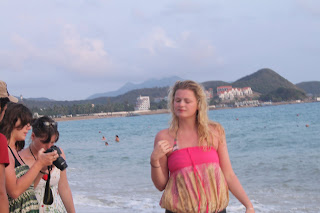 In the first two weeks of 2010, I went to Shenzhen and Hainan Island in China to spend the winter. Except for some theme parks, Shenzhen is a  concrete jungle devoted largely to business. 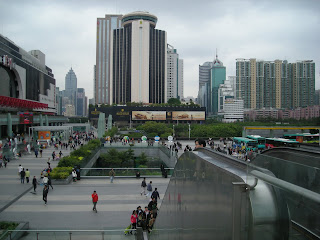 Shenzhen is just across the border from Hong Kong. 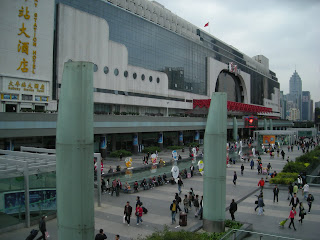 Luo Hu is noted for three things: shopping madness, a transport hub and the immigration and customs point for entry into Hong Kong. It was the shopping madness that grabbed my attention. From trinkets, handphones, remote-controlled helicopters, tailors, arts and  crafts, jade to restaurants can be found here. Want to have a dental implant? Welcome! 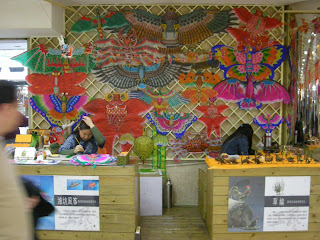 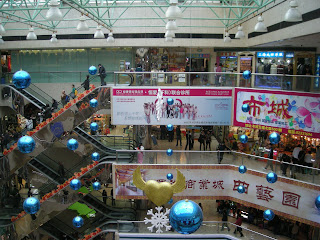 I nearly made a suit here (SGH $50) The fifth level is choked with tailors. Prices for most stuff in Luo Hu are slightly higher than in, say, Guangzhuo (a short train ride away).

I am now in Shenzhen, China.

It's strictly a business city really, and my impression is that it's a concrete jungle. Skyscrapers and huge shopping centres predominate.

For shopping addicts,  the humongous Dongmen shopping centre must not be missed. It's packed to the rafters every day, and the bargains to be found here  will leave you gasping for breath. At this time of the year, winter jackets, winter wear,  boots are the rage. Sports shoes are piled sky high outside shops, all  going for a song. You will leave Shenzhen with your pockets lighter but your spirits higher!

Even Starbucks and MacDonald's have a strong presence here.

There are theme parks and parklands on the outskirts, the latter are some of the  most beautiful in China according to some travel guides.

And if you tire of Shenzhen, you can always hop over to Hong Kong, a spitting distance away by commuter train (no derogatory nuance here).
Posted by Roger at 11:11 PM 6 comments: