Air Asia vs Tiger and Jetstar. 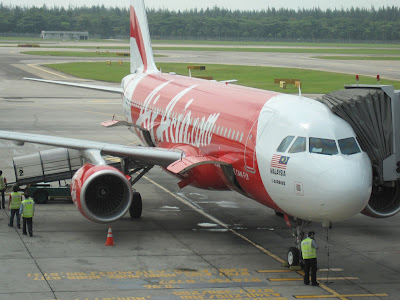 I read a news report yesterday that Air Asia has once again won the coveted award of World's Best Low Cost Airline. Congratulations to Air Asia!

But does Air Asia deserve the award?

My first encounter with Air Asia was on its inaugural  flight to Miri  from  Singapore  a few  weeks ago. I commented on my blog that I'd establish whether Air Asia's bragging rights  was hype or reality.

I've travelled on both Tiger and Jetstar, and now Air Asia so I'm now in a good position to make a realistic comparison. Don't worry although I'm from Singapore I'll give credit where credit is due.

I must admit Air Asia made a good first impression on me on the flight to Miri from Singapore.

The meals on board were reasonably priced, and the quantity was ample. Announcements were made in BOTH English and Bahasa Melayu. I particularly like the cabin crew's uniform which was stylish and professional looking. They struck me as friendly and helpful.

If you didn't know that  Air Asia is a budget airline, you'd be have thought it is  a full-service airline.

In short, Air Asia deserves the tag of World's Best Low Cost Airline, trouncing both Tiger and Jetstar  from  Singapore.

Wish list: I hope Air Asia will fly to Cairo, the gateway to the Middle East and Africa, in the near future.
Posted by Roger at 12:10 AM