The Mini Bus or Bas Mini of Sabah, East Malaysia 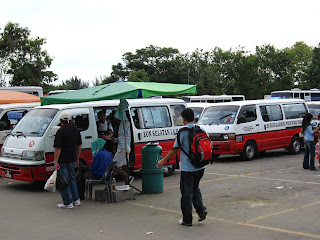 Visitors from mainland Malaysia or West Malaysia will be disappointed with the poor transport system in Sabah. This is why mini bus or bas mini in Malay is the king of the roads. It plies almost everywhere in Sabah. It's actually a van converted to carry passengers.

It won't leave the terminal until it's full. There are no designated bus stops. You can hail one from anywhere you happen to be.

To add to the confusion, small buses are also called bas mini.

In Kota Kinabalu, all bas mini end up at the Wawasan Terminal next to the Wawasan Plaza (nice foodcourt on top floor) 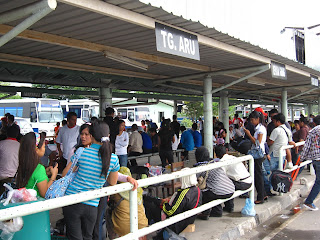 Wawasan Terminal: destinations are indicated at the top.

Bas mini fares are reasonable eg I paid RM 1.50 for distances of 4 to 8 km. The City Bus also starts here. It does a circuit of the city for 50 cents (free for senior citizens or in Malay, Warga Emas). If you are only 54 don't pretend to be one (akan datang lah)

TIP: Want to save some ringgit from the airport to the city? Just walk out to the main road 5 mins away, and wait for a bas mini. Hop in when one comes along, and hop out at Wawasan (fare: RM 1.50) Regular cab fare is about RM 20. Trying to save every cent? Ok , walk to the city - only 4 km away. By now you should have realised that bas mini is attracted to anything on two legs.