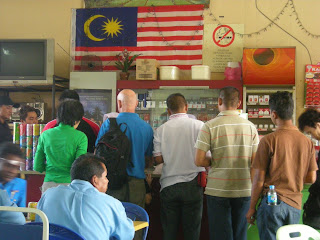 Pic: Everyone rushes to pay before train leaves (Keluang Station canteen)
KTM is a disappointment as it does not provide a dining car.

How was I going to survive the 12 -hour journey to Taiping without a proper meal? I had only some biscuits and a bun.

At Keluang Station a surprise announcement was made that we had 10 minutes to grab a bite from the station's canteen. Everyone rushed down like their backsides were on fire.

Everyone grabbed whatever they could lay hands on and rushed to pay at the same time. In the wake of the food poisoning incident in Singapore where two persons died, I played it safe and bought two hard-boiled eggs.

When the guard blew his whistle everyone rushed back into the train fearing to be left behind. In my haste I stumbled and dropped one of the eggs onto the tracks below! Half my lunch gone. Sigh.

Throughout the journey, I rationed my food (like I was in war time) to last all the way to Taiping, still a good 10 hours away.
Posted by Roger at 10:04 AM