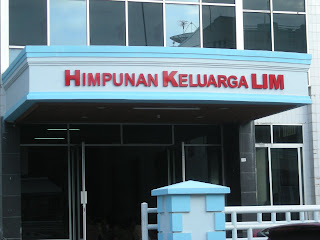 Roaming around Padang, which is the provincial capital of West Sumatra, one hot afternoon I was surprised to hear people singing very enthusiastically. On closer observation I realised the singing came from a huge building with the words "Lim's Association".

Lim is a common Chinese surname so I thought How nice to come across Chinese people in Padang. I saw a large hall which can easily accommodate at least 100 people. But the people inside were not Chinese.

On making enquiries I discovered that these people were Batak from northern Sumatra (from Lake Toba, Batak Highlands) who rented the hall for their communal gathering.

"Why are the Batak here?" I asked a young girl sitting on a motor-bike.

"Merantau," she replied. (merantau = travelling because of job demands)

As i was to discover later, there were other clan associations in Padang.
Posted by Roger at 3:02 PM