The crows of Sri Lanka 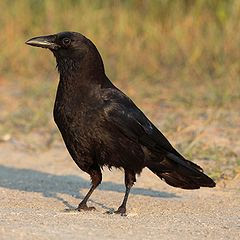 Sri Lanka must have the largest crow population in the world. In many countries they are regarded as pests. In Singapore we used to have the same problem but the crow population is kept under control by culling (shooting) them. Cruel maybe but it's the only way.

In Sri Lanka I couldn't spot smaller birds like the house sparrow. Not surprising since the crows have muscled them out. Even at the airport I saw crows roaming the skies. I don't understand why the airport authorities don't see them as a potential danger to aircraft. Crows also compete with dogs for food scraps.

And when I walked under trees I was nearly bombed by their shit.

Three guys from Slovenia told me in their country crows can be taught to talk like parrots!

I hope Sri Lanka will do something to curb the crow population. It would be nice to see other bird species as well.
Posted by Roger at 8:52 PM