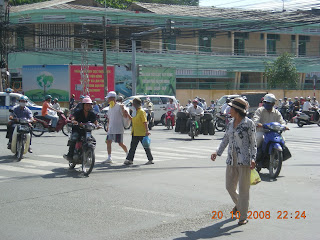 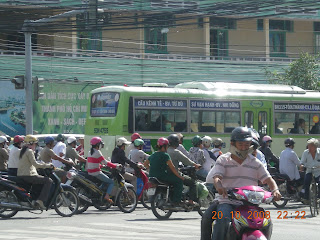 Bikes to the left, right and centre.

Anyone who sets foot in Saigon always exclaims, "Wow, so many motor-bikes!"

This is definite proof that such a person has good eyesight. An estimated 20 million bikes buzz up and down the country, in the cities, towns and countryside. Where there is anything that can support two wheels, there you will see a bike.

To own a bike is a status symbol especially among young people who dominate Vietnam's populace.

The noise generated by the millions of bikes is a backdrop against which Vietnamese go about their daily life. Sitting on little stools while sipping tea or an iced soft drink they watch the world go by, noisily.

I suspect they look on the bike-clogged streets with some measure of pride. Good for you Vietnam. You have come a long way.
Posted by Roger at 4:32 PM